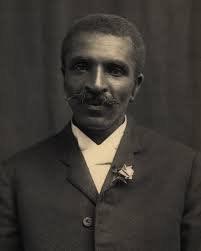 George Washington Carver was born in Diamond Grove, Missouri around 1864. A frail, sickly child, Carver was unable to work in the fields, so he did household chores and gardening. He was left with many free hours to wander the woods — collecting rocks and flowers, and beginning a lifelong love affair with nature. He soon became known as the “Plant Doctor” and would help friends and neighbors nurture sick plants.

Carver left Diamond Grove at age 12 to pursue an education, a quest that led him to Iowa. In 1890, he began to study music and art at Simpson College. An accomplished pianist and painter, his artwork was displayed at the 1893 World’s Fair. Painting enabled him to combine his two loves — art and nature. Yet it was his horticultural talents that took him in another direction in 1891. Carver became the first African-American to enroll at what is today Iowa State University. He proved to be an excellent student and upon graduation he became the school’s first African-American faculty member.

In 1896, he received a request from Booker T. Washington to become the Director of the Agriculture Department at Tuskegee Normal and Industrial School in Tuskegee, Alabama. Upon arriving, he found that the school was short on funds so Dr. Carver had to equip his own lab. He and his students would search trash heaps for items to use. This resourcefulness proved that Dr. Carver was well ahead of his time. These scavenger hunts with his students were an early example of recycling and the conservation of natural resources. Thus began an adventure in Alabama that would span five decades.

In 1916, he published the research bulletin, “How to Grow the Peanut and 105 Ways of Preparing it For Human Consumption.” At the time, the boll weevil had destroyed Alabama’s cotton crop and many farmers had turned to peanuts as a cash crop. Growing peanuts contributed to the sustainability of farms, in part because peanuts naturally add beneficial nitrogen to the soil. Cotton oil mills were converted to produce peanut oil. Livestock could eat the peanut plant and sharecroppers could feed their families on crops that weren’t sold. It’s not overstating matters to say that Dr. Carver and the peanut helped save the economy of the South.

With an insatiable curiosity and keen knowledge of chemistry and physics, Carver continued his research with the peanut. By separating the fats, oils, gums, resins and sugars, he went on to find many uses for the peanut. In fact, he developed more than 300 new uses for the humble legume. Recipes ranged from peanut lemon punch, chili sauce, caramel, peanut sausage, mayonnaise and coffee. While Carver's list of uses for the peanut included peanut paste, he didn't invent peanut butter. Cosmetics included face powder, shampoo, shaving cream and hand lotion. Insecticides, glue, charcoal, rubber, nitroglycerine, plastics and axle grease are just a few of the many valuable peanut products discovered by Dr. Carver.