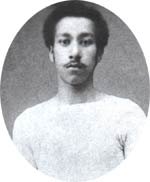 Arthur Wharton was born in Ghana in 1865; his father was half Grenadian and half Scottish, and his mother was from Ghanaian royalty. In 1882 Arthur moved to England to train as a missionary, but quickly became bored with the academic and religious life and left school to pursue a sporting career.

A talented athlete, he set a new world record for the 100 yard dash (10 seconds) at Stamford Bridge in 1886. This success gave him the opportunity to compete in professional athletics tournaments, where he was able to make a living from appearance fees. His abilities also brought him to the attention of various professional football clubs

He was first signed as a semi professional player with Preston North End in 1886, as goalkeeper. His highpoint with Preston was to make it to the FA Cup semi finals in 1887 where they lost 3-1 to West Bromwich Albion. There was speculation at the time that Arthur was good enough to play for England, but he was never considered for the position by the FA, due in part to the racial prejudice of the time.

He turned fully professional in 1889, when he signed for Rotherham United, and in 1894, Sheffield United poached him. Unfortunately, the move was not a success; he was getting older, and was competing with United's new and younger goalkeeper, Bill "Fatty" Foulke.

Arthur's career then drifted as he moved from club to club to try and make a living. At the same time, he started drinking heavily, and eventually retired from football in 1902. His life after retirement was not happy, and Arthur Wharton died in 1930, a penniless alcoholic who had spent the last 15 years of his life as a colliery haulage hand.

His story was uncovered in 1997 by the Sheffield United based project, "Football Unites Racism Divides". His unmarked grave in Edlington has been given a headstone, and his picture was included in an exhibition of British Sporting Heroes at the National Portrait Gallery.